Documentaries are being created for the houses of nature about nature, the landscape and man, the peculiarly interwoven stories in four seasons of the year, which intertwine with the story of the symbol of the House of Nature. You can also view other films here about activities aimed at supporting and saving the rare animal species.

A dark fearsome forest, so far untouched by human hands. Trails trodden by bison and elk, remnants of a feast – a bear or a wolf pack? A white-throated dipper hunting in a stream. A world of large animals, as well as those barely perceptible to the naked eye, in close connection with plants and fungi. In the 13th century, the great pan-European colonization swept across the Žďárské vrchy landscape and began to change it significantly. People with tools appeared at the edges of the boundary forest. The inhabited landscape changed its appearance. Most of the boundary forest was replaced by fields, pastures, and meadows, lined with field boundaries and hedges; ponds, mills, hammer mills and sawmills appeared on the streams and rivers. Nature conservation has a long tradition in Žďárské vrchy. In 1933, Žákova hora near Cikháj was declared a protected area. To preserve the heritage of this cultural landscape, which is so connected with nature, Žďárské vrchy Protected Landscape Area was declared in 1970. Mountain cottages, memorial trees, and important architectural works remain in it. The most distinctive is the pilgrimage church of St. John of Nepomuk on Zelená hora.

Welcome to a landscape of white rocks and shaded gorges, to a world of waters which plunge loudly into the jagged mouths of the sinkholes that lead waters from daylight to the eternal darkness of the large abysses and domes. The world of silence in the karst underground is only disturbed by the rhythm of falling drops that are transformed into the unique forms and shapes of dripstones, sinter pools and cave pearls.
Welcome to the land that used to be inhabited by the cave bear, lion and hyena aeons ago, the land which gave shelter to Neanderthal man, to be followed at the end of the last Ice Age by modern man and his works of art. Underground and surface karst phenomena are accompanied by a diversity of living nature. In contrast to the sunlit slopes with their thermophilic species in the south of the karst area, the cold and moist karst canyons cut deep to provide room for submontane and montane species. The darkness of the karst underground is used by bats for their long hibernation. This cold and moist world is also home to other species.

The Solar Mountain, an art work created by Milos Sejn, is part of the Gallery in the Nature, an outdoor exhibition of the Litovelske Pomoravi House of Nature. The Solar Mountain is an artificial landscape feature urging one to stop by, dream, enter the darkness of its inner space and climb its grassy peak. The inner space of the Mountain, which hides art works by the sculptors Jiri Kacer, Zuzana Kacerova and Rastislav Jacek, allows us to pause, sit, kneel and lie down. Above the well level and above the mountain peak there hang two bells by Petr R. Manousek, the inner one dedicated to earth and water and the outer one referring to the sun and wind.

Houses of Nature - Come, see and learn about protected areas in the Czech Republic 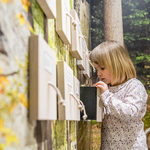 Visitors and information centres in protected landscape areas in the Czech Republic. To view brochure.